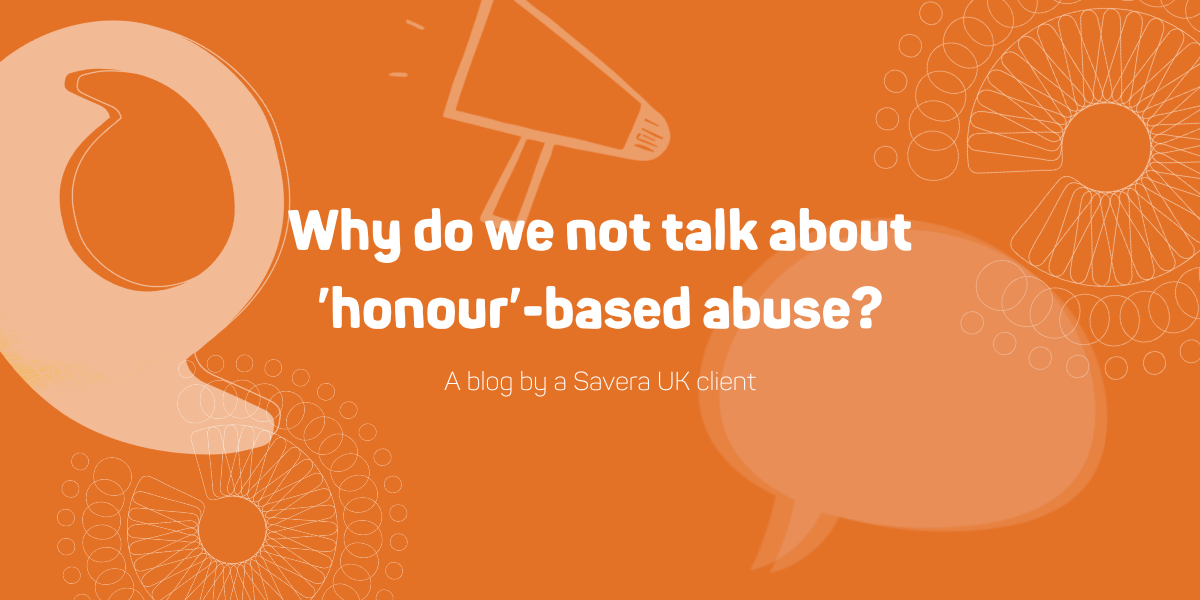 In her first blog for Savera UK, an anonymous client explains her experience of ‘honour’-based abuse (HBA), why we don’t talk about this kind of abuse enough, and why looking at the bigger picture, as well as the most extreme cases, is important in gaining a better understanding.

When I hear the words ‘honour’-based abuse, I immediately picture a fierce-looking middle-aged man, wearing a dhoti (a form of sarong that outwardly resembles loose trousers) holding an axe, ready to strike this young woman who is cowering on the ground as death stares her in the face. This image stopped me, for decades, from accepting that ‘honour’-based abuse is a problem in my culture. In fact, it stopped me from recognising that I, too, was a victim.

I worried, and not without good reason, that this image perpetuated classist and racist stereotypes of brown men, and especially those hailing from rural areas. From that worry, I assumed, incorrectly this time, that to accept that ‘honour’-based abuse was a real problem in my culture would give credence to the idea that men from my culture are barbaric and uniquely predisposed to crimes passionels (crimes of passion), an idea that had gained so much currency in the first decades of this century. Especially when I joined the first wave of international students in the US since 2001, I felt it was necessary to bring nuance to this picture. The racist and classist stereotyping had far-reaching consequences for me, personally, as it pushed me into a corner from where I could not defend myself against the abuses of my own culture. But that is, perhaps, a story for another time.

Looking back at this experience, however, allows me to understand one reason why the larger British society is reluctant to talk about ‘honour’-based abuse. In the world where anti-Semitism, Islamophobia and even Nazi revivalism abound, it is difficult, and even risky, to acknowledge anything negative about a vulnerable group. I have seen simple appeals for donations for refugees devolve into a clash of civilisations narrative. In this context, it is easy to believe that there is more than just apathy that is holding back British society from acknowledging ‘honour’-based abuse.

But my good intentions did not save me from being victimised. Nor will the society’s collective strategic tactfulness save the countless young people of all genders who are being forced into marriages or otherwise abused in the name of so-called ‘honour’.

As mentioned earlier, I was so fixated on the axe-wielding, paan­-chewing male abuser image, that I was blinded to my own abuse. Probably similar to how constructions of domestic abuse as only physical abuse keep a lot of victims from recognising the emotional, verbal or financial abuse that they are experiencing. Something that has worked in the latter case is expanding our understanding, at the societal level, that abuse can present in more subtle forms, such as coercive control. In the same way, we need to nuance our understanding of ‘honour’-based abuse, and to learn more about how it works.

In my case, I was not abused by my father, but by my mother. No one held a gun to my head, but life seemed unliveable, and I was constantly fantasising about using one on myself. I was not forced on to a plane and sent away. Instead, I was groomed from childhood into thinking that moving permanently away from my family would be dishonourable. In speaking of my experience, I do not wish to speak over the women who do face these very blatant threats to their lives, safety and freedom. Instead, I wish to point out that very often society hears about only the most extreme cases, and that those cases are merely the tip of the iceberg. ‘Honour’-based abuse, like all forms of abuse, works at multiple levels in many insidious ways.

To really protect those vulnerable to ‘honour’-based abuse, we need to understand the bigger picture within which this abuse takes place. We need to develop a better collective understanding of the mechanics of this form of abuse. And our allies in wider British society need to listen to us when we say that ‘honour’-based abuse is a problem.