As part of the Orange the World 2021 campaign, Savera UK and Zonta London (a member of Zonta International) will be holding a panel event titled ‘Culture is Beautiful: No Excuse for Abuse’. Panelists will discuss tackling the harmful ways that culture is wrongly conflated with human rights abuses against women and girls.

The event will also share the voices of survivors and there will be an open Q&A session where attendees can put their questions to the panellists. 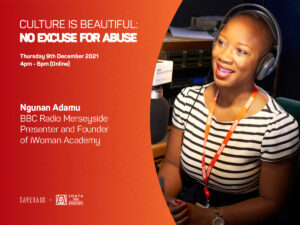 Ngunan Adamu is a BBC Radio Merseyside presenter/producer for the Upfront Show. She is the founder and CEO of iWoman, a programme which helps unemployed women in the region develop the skills and confidence to get into media, and has also been involved in training other journalists for the BBC World Service and worked on the BBC Young Reporter programme. 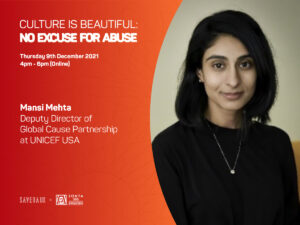 Mansi is the Deputy Director of Global Cause Partnerships at UNICEF USA, she is a partnership development and public health professional. In her current role, she works to build partnerships with organisations whose mission and vision align with that of UNICEF and UNICEF USA. One of these organisations is Zonta International who since 2014 is supporting the UNFPA-UNICEF Global

Previously, Mansi worked at the Earth Institute of Columbia University on various health and education-related programs with a focus on empowering girls in sub-Saharan Africa through information, communication and technology. She has her Masters in Public Health and her undergraduate degrees are in Biology and Policy Studies

PD Dr. Elham Manea is a Privatdozentin (equivalent to Associate Professor) at the Political Science Institute, University of Zurich, a writer and human rights advocate. Her research focuses on 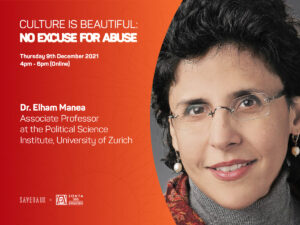 countries of the Arabian Peninsula, especially Yemen, Gender and Women under Muslim Laws; and Islamism. In 2010 she was appointed by the Swiss Federal Council as a Member of the Federal

Commission for Women Affairs and in 2020 at the Federal Commission for Migration, where she serves as a vice president. She has published academic and non-fiction books in English, German, and Arabic in addition to two novels in Arabic. 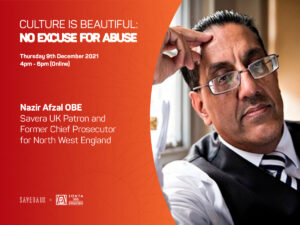 Nazir Afzal OBE is the Patron of Savera UK and the Former Chief Prosecutor for North West England. He is an expert in de-radicalisation and a senior British lawyer who campaigns on issues

around child sexual exploitation and violence against women. He is also the author of The Prosecutor, a “searing insight into the justice system and a powerful story of one man’s pursuit of the truth”. 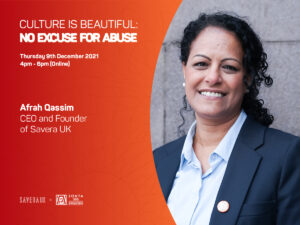 Afrah is the Founder and CEO of Savera UK, a leading national organisation tackling the causes and effects of harmful practices including ‘honour’-based abuse, female genital mutilation and 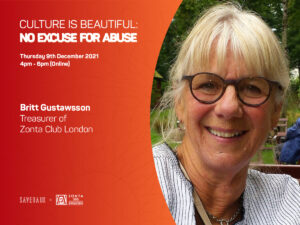 Britt Gustawsson is a long-standing member of Zonta International, presently Treasurer of the Zonta Club

London and member of the Zonta International Nominating Committee. She is active in the UK CSW Alliance, which organizes civil society in the UK before and during the Commission

on the Status of Women (CSW). She has had a long career in senior management in privately owned multinational companies both in Sweden and the UK, and has worked globally in risk management, compliance and dispute resolution in multiple jurisdictions.

Savera UK aims to make events as accessible as possible. If you require reasonable adjustments to access this online event, then please contact us one week before the event so that actions can be taken to support you.